Check out Margo in the community at The Press Democrat, Poets & Writers 2016 and 2018, KRCB, and KALW Booktalk 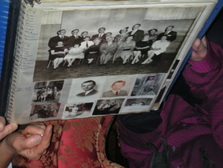 Margo Perin's personal story is about invisibility and the search for identity and a sense of home. When she was seven years old, her father, who had been jailed several times, received word he was about to be investigated for his participation in a Mafia scheme to extort thousands (today worth millions) of dollars from investors. Margo's family began a life on the run so that her father wouldn’t have to serve a twenty-year prison sentence. In seven years, the family moved eight times, crossing five countries and two continents, sometimes visited by a Mafia "message boy," sometimes sharing their living room with a bodyguard. They often moved in the middle of the night, always without warning. Margo's parents changed their last name and severed all ties with the past, family, and ethnicity. They came from nowhere, defined by who they were not, not by who they were. As they moved, so too did their internal landscapes, and their lives became a chain of shifting realities, linked by secrets and shaped by growing violence and deception.
Margo's hope is that as we discover and rediscover our humanity through writing and sharing our writing, we will no longer be able to deny the humanity in others and we will find an end to violence. The words of Eli Weisel are a source of inspiration for her community projects: